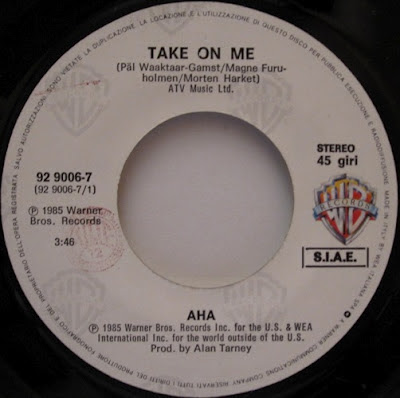 As i am too lazy to write so i coped and pasted something for you to read from wikipedia:

"Take on Me" is a song by the Norwegian pop band A-ha. Written by the band members, the song was produced by Alan Tarney for the group's first studio album Hunting High and Low, released in 1985. The song combines synthpop with a varied instrumentation that includes acoustic guitars, keyboards, and drums.

The original "Take on Me" was recorded in 1984, and took three releases to chart in the United Kingdom, reaching number two on the UK Singles Chart in November 1985. In the United States the song reached the top position of the Billboard Hot 100 in October 1985, due in no small part to the wide exposure of its memorable and cutting-edge music video on MTV, directed by Steve Barron. The video features the band in a pencil-sketch animation called rotoscoping combined with live-action. The video won six awards, and was nominated for two others at the 1986 MTV Video Music Awards.

Two videos were made for the song. The first release of "Take on Me" in 1984 includes a completely different recording, and was featured in the first video, which shows the band singing with a blue background. The second video was directed by Steve Barron, and filmed at Kim's Café and on a sound stage in London, in 1985.The video used a pencil-sketch animation / live-action combination called rotoscoping, in which the live-action footage is traced-over frame by frame to give the characters realistic movements. Approximately 3,000 frames were rotoscoped, which took 16 weeks to complete.

The video's main theme is a romantic fantasy narrative. It begins with a montage of pencil drawings in a comic book style representing motorcycle racing, in which the hero, played by Morten Harket, is pursued by two opponents, one of whom is played by UK actor Philip Jackson. It then cuts to a scene in a cafe, in which a young woman, played by Bunty Bailey (Harket's girlfriend at the time) is seen drinking coffee and reading the comic book in a coffee shop. As the girl reads, the waitress brings her the bill. The comic's hero, after winning the race, seemingly winks at the girl from the page. His pencil-drawn hand reaches out of the comic book, inviting the girl into it. Once inside, she too appears in the pencil-drawn form, as he sings to her and introduces her to his black-and-white world.

Meanwhile in the restaurant the waitress returns and believes the girl has left without paying the bill. Angrily, she crumples and throws the girl's comic-book into a trash-bin. This makes the hero's two opposing drivers reappear, armed with a large wrench and apparently aggressive. Harket punches one of the thugs and retreats with the girl into a maze of paper. Arriving at a dead end, Harket tears a hole in the paper wall so that the girl can escape as a pipe wrench is raised in front of him (it is unclear as to whether this is the thugs' wrench or one Harket plans to use in self-defense). The girl, now found lying beside the trash-bin to the surprise of restaurant guests and staff, grabs the comic-book from the bin and runs home, where she attempts to smooth out the creases to learn what happens next.

The next panel shows Harket lying seemingly lifeless, and she begins to cry. But he wakes up and attempts to break out of his comic-book frames. At the same time, his image appears in the girl's hallway, seemingly torn between real and comic form as he maintains the effort to break his barriers. He escapes from the comic book by becoming human and stands up. Smiling, the girl walks towards him and he embraces her. This final scene is based on the 1980 movie Altered States.