Wish You Were Here- Pink Floyd 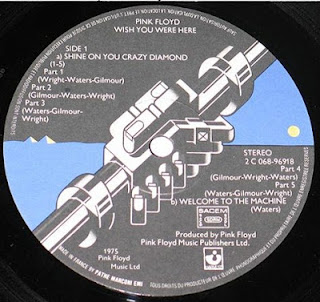 "Either the music comes first and the lyrics are added, or music and lyrics come together. Only once have the lyrics been written down first — 'Wish You Were Here'. But this is unusual; it hasn't happened before."—Roger Waters, 1975

"I wrote it around the time my grandmother died. She spent her last years at my mother's house, and when I visited, she would look at me with an anguished expression and go, 'Robert!' Robert was her husband, who had been dead for twenty years. It was very tortured and moving."—Roger Waters, New York magazine, 9 November 2009, p. 21

"When it sounds like it's coming out of a radio, it was done by equalisation. We just made a copy of the mix and ran it through eq. to make it very middly, knocking out all the bass and most of the high top so that it sounds radio-like. The interference was recorded on my car cassette radio and all we did was to put that track on top of the original track. It's all meant to sound like the first track getting sucked into a radio with one person sitting in the room playing guitar along with the radio."—David Gilmour, 1975, WYWH Songbook

And did they get you to trade
Your heros for ghosts?
Hot ashes for trees?
Hot air for a cool breeze?
Cold comfort for change?
And did you exchange
A walk on part in the war
For a lead role in a cage?