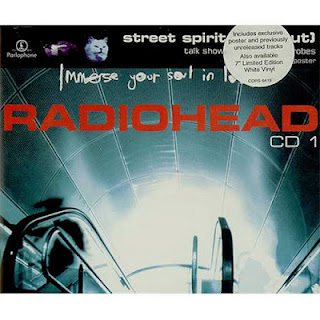 "Street Spirit (Fade Out)  is a song by English alternative rock band Radiohead, featured on their second studio album The Bends, which was released in 1995.

In an Interview with Brian Draper from Third Way Magazine, october 11th 2004 Yorke said that the song completely influenced by the novel The Famished Road, written by Ben Okri that he read on tour in America, and also inspired by REM.

From an unknown source there is an often quoted lines about York's opinion about the song:
"Street spirit is the darkest thing we've ever done, but I didn't compose it, it composed itself. we were just the messagers. all of our songs, no matter how dark they are, they always have a solution, but not this one.? is like being trapped forever, is the tunnel without the light at the end" -Thom Yorke

One of the interesting part of this song it's the video. The music video for "Street Spirit" was filmed during two nights in a desert just outside Los Angeles. and directed by Jonathan Glazer.

Glazier told The Guardian Setember 24, 2005: "With Radiohead, it's very much about convincing Thom Yorke of your ideas. But once he's chosen you there's not any interference - he wants you to go off and be experimental. I'd had this idea for ages that I'd seen in nature programs, where they'd film an eagle flying at 1,200 frames per second then cut frames out to slow it down. It's a technique you see in every second ice-cream commercial nowadays but back then it was new. They weren't sure if they wanted to make Street Spirit the next single so I initially wrote this idea up to be used with a different song. We shot the whole thing at night in the desert outside LA. The band are hardly the most rowdy on set. They just slept the whole time. I'd have to wake them once in a while so I could film them being pushed off a chair. They'd wake up and do it a bit gruffly then go back for another kip. In the end, I'd spent so much time filming shots of breaking glass and nuns jumping off trampolines that I hadn't got the right performance out of Thom. I had to cut the video together with black windows inserted where he should have been. But the record company liked what they saw enough to arrange for me to go to Germany a few weeks later to film Thom singing. In the end it worked out. That was the film that, creatively, got me up and running."

Anthony Kaufman from "People" ask Jonathan Glazer, of what he learned from Street Spirit video in an interview, he said, "That was definitely a turning point in my own work. I knew when I finished that, because they found their own voices as an artist, at that point, I felt like I got close to whatever mine was, and I felt confident that I could do things that emoted, that had some kind of poetic as well as prosaic value. That for me was a key moment.
Dearplaylist Radiohead