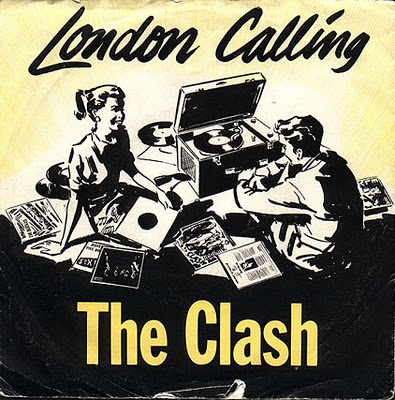 I went to a Roxette concert last week and got a ride from a friend. Along the way to the way to concert hall, a The Ramones heard-like tunes accompany us. I did not took any notice to the songs, for the songs are easy and most the beats are moderate, not to fast, not too slow. I kinda enjoy listening to them. I heard The Ramones before in her car also, but that time was not The Ramones, i knew a few songs of The Ramones, I even have a Ramones shirt.

One of the song, the vocalist shout: "Breakin' rocks in the hot sun, I fought the law and the law won". CD is playing over and over again. On the way back, i was told it was The Clash. I've heard about this band a long long time ago, but i never really listen to the band.

I was suggested to listen to London Calling, the first track from the album London Calling (1979). The song is the lyric is not as easy listening as the music.

I read some facts about the track:
- "London Calling" was released as the only single in the UK from the album and reached #11 in the charts in December 1979.
- The music video shot by Don Letts showing the band playing the song on a boat (Festival Pier), next to Albert Bridge on the south side of the Thames, Battersea Park in a cold and rainy night at the beginning of December 1979.
- In 2004, Rolling Stone rated the song as #15 in its list of the 500 Greatest Songs of All Time
- "London Calling" was also ranked #42 on VH1's "100 Greatest Songs of the '80s".
- It is one of The Rock and Roll Hall of Fame's 500 Songs that Shaped Rock and Roll.
- A supergroup consisting of Bruce Springsteen, Elvis Costello, Dave Grohl, Steven Van Zandt, Pete Thomas, and Tony Kanal performed the song at the 2003 Grammy awards as a tribute after the death of Joe Strummer.

Well i don't really give a damn about all the ranks. All I know i need to play London Calling when my lunch is calling.
Here is the video: