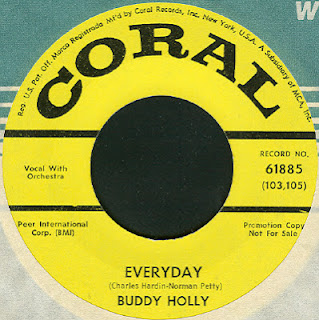 In the Original version, Buddy Holly plays acoustic guitar; drummer Jerry Allison did notplay the drum but slaps his hands on his lap for the beat; Joe B. Mauldin plays a standup acoustic bass; and producer Norman Petty's wife, Vi, plays the celeste.

The song's length is 2 minutes and 5 seconds. The song is ranked #236 on the Rolling Stone magazine's list of The 500 Greatest Songs of All Time.

Song Covers:
-Tina Robin, also with the Coral Records label, recorded a version of the song In 1958,
-John Denver recorded this song on his 1971 album Aerie.
-A version recorded by James Taylor was released in 1985, becoming a huge AC hit,
-Erasure on their 2002 album Other People's Songs.

-Hellogoodbye on their 2008 EP, Ukulele recordings.
-Phil Ochs used a portion of the song as part of his 'Buddy Holly Medley' which appeared on 1974's Gunfight at Carnegie Hall LP.

-In 1990, British guitarist Peter White's recording was released on the album Reveillez-Vous.
-Patrick Stump has recently contributed a cover version for Buddy Holly tribute album, Listen to Me: Buddy Holly (2011).

The song has been featured in Film and TV shows:

-Stand by Me,(1986)
-Gummo (1997)directed by Harmony Korine.
-Big Fish,directed by Tim Burton
-Lynne Ramsay's "We Need to Talk About Kevin".
-The song featured in a television commercial for an AT&T BlackBerry, in Episode 11, Season 4 of the -television show "Lost"
-The song has also been featured in episode 4, series 3 of the British sitcom How Not to Live Your Life. - -Mr. Nobody

For me this song is a favorite since Tim Burton's film Big Fish and recently the song is my 4 year old son's anthem.

Check the video of the song: