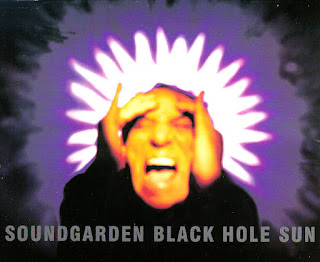 "Black Hole Sun" is my first experience with Soundgarden, an American rock band. The song was written by Chris Cornell and released in 1994 as the third single from the band's fourth studio album Superunknown (1994).

The album Superunknown is the most commercially successful amongst Soundgarden's previous records as it was a multi-platinum with more than 5-million sold.

In a report, Jennifer Clay from RIP Magazine wrote that  it was MTV, commercial radio, and arena rock, a long way from being an opening act for the likes of Danzig and Guns N'Roses. Then Soundgarden was slapped on the cover of Rolling Stone as quickly as Jennifer Aniston's bare body and Green Day's smirks, are about to co-headline with one of the heaviest commercially successful bands, Metallica, on what will probably be one of the biggest money-making tours of '96, faux-alternative Lollapalooza, and they're selling truckloads of records. Does all this make them commercial? Chriss said "I guess, yeah. We're not a hit-oriented band, but we're a commercially successful band. To me, it almost seems like the ultimate situation to be in," Cornell says, smiling.

Greg Prato of Allmusic called the song "one of the few bright spots" of the summer of 1994 when "the world was still reeling from Nirvana leader Kurt Cobain's suicide the previous April". He said, "The song had a psychedelic edge to it (especially evident in the verse's guitar part), as the composition shifted between sedate melodicism and gargantuan guitar riffs. The lyrics were classic Chris Cornell—lines didn't exactly make sense on paper but did within the song."

The music video for "Black Hole Sun" was directed by Howard Greenhalgh, produced by Megan Hollister for Why Not Films (London, England), shot by Ivan Bartos, and features post-production work by 525 Post Production (Hollywood, California) and Soho 601 Effects (London) and released in June 1994. Here is the video of Black Hole Sun:


A few info of the song:

- The music video for "Black Hole Sun" became a hit on MTV and received the award for Best Metal/Hard Rock Video at the 1994 MTV Video Music Awards.
- In 1995, it received the Clio Award for Alternative Music Video.The video is available on the CD-ROM Alive in the Superunknown.
- "Black Hole Sun" is a playable song in the 2007 video game Rock Band.
- The song is also available in the 2008 video games Karaoke Revolution Presents: American Idol Encore and SingStar 90s, for the PlayStation 2.
- Guitar Hero: Warriors of Rock features the song in its downloadable content library.


source: Wikipedia with modifications. references are checked and verified.