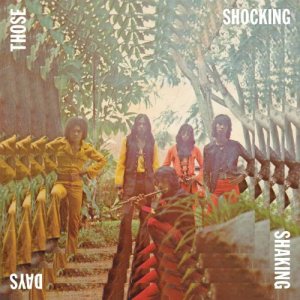 
The conversation comes at the beginning of a track called Shake Me from AKA, a funk rock band from indonesia  in Those Shocking Shaking Days: Indonesian Hard, Psychedelic, Progressive Rock and Funk 1970 – 1978, a compilation album consist of 20 tracks of amazingly great songs from the 70's.

I bought the album LP in a CD store after watching the records in Youtube. Even in Indonesia, the records of the songs compilated in this album is very hard to find and the songs is rarely ever played in radios and only little number of people know.

"The frontman for psych-rock eccentrics Panbers opens this revelatory compilation by singing, "I like Beatles songs / I love Rolling Stones / I love Led Zeppelin." Suffering under a brutal dictatorship, bands in '70s Indonesia also took refuge in James Brown, Grand Funk Railroad, and the Incredible String Band. If I thought it were possible, I'd even say they were fans of Brazil's Os Mutantes, both for their far-flung musical influences and politically rebellious spirit."

Here is the track list of the Anthology, the picture is the back sleeve of the LP: 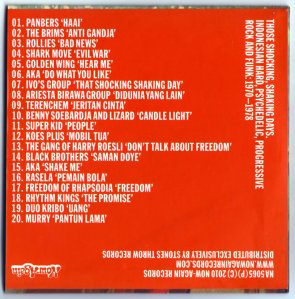 For your listening, here is 2 videos of the song included in the album:

Shake Me from AKA

Anti Gandja from the Brims:


Buy the Album from Amazon: