You Really Got Me-The Kinks 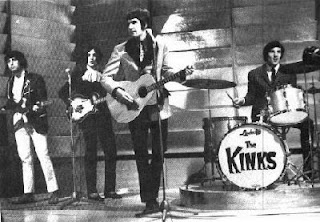 Have you ever heard about "British Invasion?" well, according to Encyclopedia Britannica Online, "British Invasion is musical movement of the mid-1960s composed of British rock-and-roll (“beat”) groups whose popularity spread rapidly to the United States. The Kinks has been recognized as one of the invader along with The Beatles, The Who, and The Rolling Stones.

In 1964 brothers Ray and Dave Davies, formed  The Kinks  in Muswell Hill, North London. The Song Girl You Really Got Me is the third single of their first album Kinks. The song was released on 4th August 1964 and become internationally successful as it reached top of the charts in the United Kingdom and reaching the Top 10 in the United States. In his  book Running with the Devil: Power, Gender, and Madness in Heavy Metal Music, American musicologist Robert Walser wrote that it is, "the track which invented heavy metal" and and heavily influenced later rock musicians, particularly the heavy metal genre.

Here are song facts of You Really Got Me:

- written by Ray Davies and performed by his band, The Kinks
-  The song was released on 4th August 1964
- Rolling Stone magazine placed the song at number 82 on their list of the 500 greatest songs of all time and at number 4 on their list of the 100 Greatest Guitar Songs of All Time
- In early 2005, the song was voted the best British song of the 1955-1965 decade in a BBC radio poll
- In March 2005, Q magazine placed it at number 9 in its list of the 100 Greatest Guitar Tracks
- In 2009 it was named the 57th Greatest Hard Rock Song by VH1
- U.S. hard rock band Van Halen recorded "You Really Got Me"  for their 1978 debut album, Van Halen
- Van Halen version was also used by Nissan for its Japanese commercials
- Van Halen version appeared in the 2003 video game Karaoke Revolution and the 2006 video game Guitar Hero II
- The song was used on the soundtrack for the early Ron Howard film Night Shift

This song is really rock n Roll, the guitar Riff could make your head banging and make your body moves. This is the right song  to tell your feeling of love to the girl you love, if you have no other way of course :). But there's no guarantee to work, it's your own risk. Haha. Happy listening.
Here's the link to the video on youtube

Buy the track on Amazon