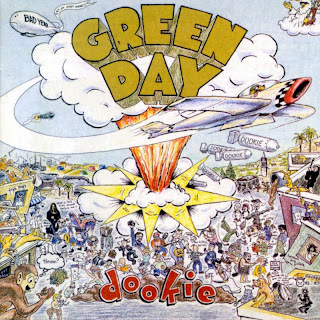 A Girl who is posting a video of her covering Green Day's She from the album Dookey wrote:

"I wanted to acousticize a Green Day song and I found that this was one of the most melodic of their early songs. Oh wait, you didn't know there was a Green Day before "American Idiot"? Well there was, and if you didn't know, shame. And if you do know, then I hope you enjoy my video."
i just smile..
and smile.....
a very big smile as i remembered the album dookie was one of the album that i as a first year high school student in 1994 listen almost everyday. With the Basket Case and when i come arroud video aired in MTV almost everyday, the album "Dookie" is the best-selling album of the band, with with 15 million copies sold worldwide. Dookie won the Grammy Award for Best Alternative Music Album in 1995.

Of the album Dookie, there is a single called "she", an only 2 mins and 16 second melodic song. "She" is very hear-able punk rock song with a short and easy to remember tunes and lyrics,a true Green Day signature song. The radio-only single song is never had a video.

Here is the video of the girl i mentioned above covering "she" :