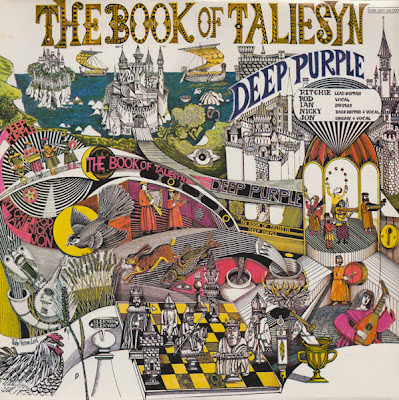 
It was the end of the Requiem (2006) a German language film i watched in 2006 an intro of Organ playing fast notes, followed by guitar playing along with a warm voice of a man, a song ended the film. I recorded the song straight from the film using sound recorder software. Time flies, and it was 6 years ago as i remembered the song today and searched the film information.

The song tittle is Anthem, it is from the Deep purple's second album The Book of Taliesyn (1968). Deep purple, a British rock band. the band did not released Anthem as a single. Below is the cover of the Album. The The cover of the 1968 album was created by the illustrator and author John Vernon Lord. The Artwork is just awesome.


I like the 6 minutes 31 seconds song written By Jon Lord, the hammond organ player and Rod Evans, the lead vocalist of the band, because of the atmosphere the song built when I am listening to it. It recreates the feeling of longing to someone we have lost in the past. I think the song is underrated because it never included in any compilations CD.