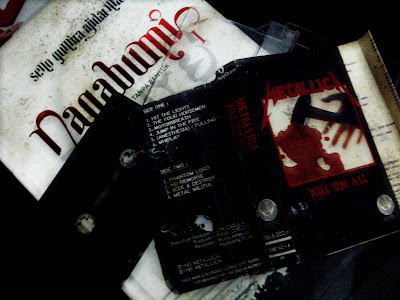 Yesterday I bought an Indonesian historical fiction novel titled Nagabumi by an indonesian author Seno Gumira Ajidarma. The very begining of the first chapter of the book told me a story of  a 100 years old Javanese Warrior who invited all the warriors all over java to fight him. In the night of the fight 100 warriors come up to kill him, but with all the preparation he made, he kill 'em All.

As i continue to read the 815 pages book, i recalled the first album by Metallica, Kill 'em All. The album was released in 1983, and i bought the 1989 cassete tape of the album and still works good today.

I was impressed by a track called (Anestesia) Pulling Teeth, a solo bass play by Burton, which i (still) thought until i write this post, it was played on guitar, for it sounds really like a guitar, with heavy distortion and wah wah pedal playing and i never noticed what Burton said before the song was "Bass solo, take one" and never read the credit of the song also.

The track is a pit stop after head banging with the first four neck wrecking, bone cracking, life taking tracks and a little battery charging for the next 5 head smashing tracks of the album.

Here is the video of Burton playing (Anesthesia) Pulling Teeth 1n 1983. he was not the fastest but he really made those bass strings cry. Listen to the song here: