All Along The Watchtower- Eddie vedder and Million Dollar Bashers 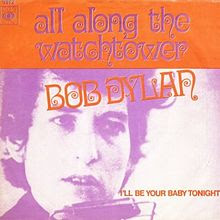 Q&A
Q: Who Wrote this song?
A: Bob Dylan
Q: Whwn did Dylan record the song?
A: Dylan recorded the song on November 5, 1967, at Columbia Studio A in Nashville, Tennessee
Q: In What Album the song first appeared?
A: In John Wesley Harding 1967 album .
Q: Name us the artists had covered the song?
A: Huge numbers, but if we must name: Grateful Dead, Jimmy Hendrix, Dave Mason, Neil Young, U2, Eddie Vedder and Pearl Jam, Van Morrison, Supertramp, and many otrhers
Q: When did jimmy Hendrix start to record the song?
A: Six months after Dylan's original recording, on January 21, 1968
Q: What's the impression of Dylan on Hendrix version?
A: In an interview He said: "I was overwhelmed, really. He had such talent, he could find things inside a song and vigorously develop them. He found things that other people wouldn't think of finding in there. He probably improved upon it by the spaces he was using. I took license with the song from his version, actually, and continue to do it to this day."
Q: Where is the version of Eddie Vedder  and The Million Dollar Bashers can be found?
A: In the soundtrack of the Dylan's film I'm Not There. Named for Dylan's song "Million Dollar Bash", the group was formed by guitarist Lee Ranaldo of Sonic Youth. Its other members included Steve Shelley on drums; Television's Tom Verlaine, Wilco's Nels Cline, and Smokey Hormel on guitars; John Medeski of Medeski Martin & Wood on keyboards; and Dylan's bassist Tony Garnier.
Q:Which version of the song is the best?
A:I don't know but Rolling Stone magazine ranked Hendrix's version in 47th position of 500 Greatest Songs of All Time. But I dont care, I like the Hendrix' and The Eddie Vedder and Million Dollar Bashers version.
Here's the video of  Eddie Vedder and Million Dollar Bashers version.